Welcome to Paaws and Applause, the Paaw Prints blog. This is a community site that lets you share your special events and stories of what they do that makes them so special and sometimes very naughty. If you have a story you would like to share, please contact us and we will review the schedule and availability.

We begin our inaugural run with an introduction to Cali, our latest rescue who just celebrated her third birthday with us as she turned 5 ish.

Cali was found on the streets of Fresno, California. I did not include her intake photo as her wrecked body was to distressing to imagine what monster committed these unspeakable acts of horror. For reasons not known she was moved to Phoenix where we first met her on the rescue site. We had been looking for another rescue as we lost Tootsie, our cowgirl cattle dog,  and in that photo we felt the spark. When we met her the spark ignited and we began the adoption process. We fostered her for 2 weeks and soon after she started her new life in her forever home. 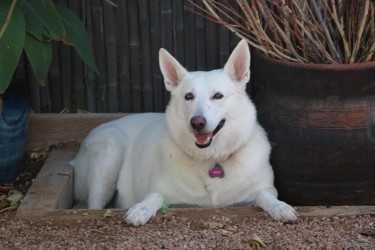 Everything was going fine and then something happened and Cali’s mood changed and she became the most challenging rescue we ever had. It's easy to say that rescues have mystery history or they suffer from fear aggression but Cali seemed to now be angry at everyone because of a left handed white man who wore sunglasses and a baseball hat. Who says they can't talk. She seemed to be venting the only way she could. Even Jazzie, who was 11 at the time, became frightened. Our family started feeling very unsafe around her.

We loved her and felt that we could not handle her and notified the rescue of our concerns. However, we also believed that if she went back she might not be placed again. The rescue staff was great with us and we agreed to give her more time. We knew that if we could just let her vent the horrors she could free herself of the vampires. To that end we came up with a plan but before we could implement it Jazzie had had enough. She went up to Cali, assumed the bulldog position and read her the riot act not once but 4 times. When she was done Cali buried her head in her blanket and didn't move for the longest time. From that point on Cali was a changed dog and things began to happen. 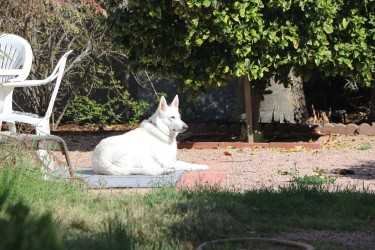 As a child of the 50's watching the westerns on TV, I learned that the secret of breaking a wild stallion was to build a bigger corral, get others involved and let the horse run until it was to tired to buck. The second part was to give Cali a job to keep her busy. The corral was easy, we live in an area where the properties do not have walls and very few fences so she had access immediately to 6 neighbors. The next step was to get them involved though by this time they were a little nervous like the rest of us. Fortunately, they were all dog people and we proposed the following: Cali is a Shepherd so let her tend to the flock who became all of us. She now used her barking at their back doors waiting for one of our treats with which we had supplied them. Since we were the only property with a fence and gate, her travels around Boston and Anaheim street were always supervised and not only did she get companionship with more people and dogs but the village itself grew closer as we all got to know each other. She quickly grew into the role with Jazzie and both became the darlings of our quadplex.

So there you have it. On May 21st she celebrated her third birthday with us and all attended. She still happily barks and talks like no other dog I've ever met but that's what she does. Her job is to protect the flock and be part of a loving family and to know that without her all our lives would be less fulfilled without her on the hill.

Like the other angels that came to us over the years I always remembered the fathers advise to his son from that old back and white movie: "If you learn their language they will learn yours."

When Jazzie left us last October, Cali waited and checked her bed and food bowls daily and finally a week later came to us and cried. We knew that the hole in her heart was as big as ours and we held her and cried with her. We promised that when the time comes she will have another sister to love, protect and with which to share her life.

So now she waits patiently as she watches her flock.